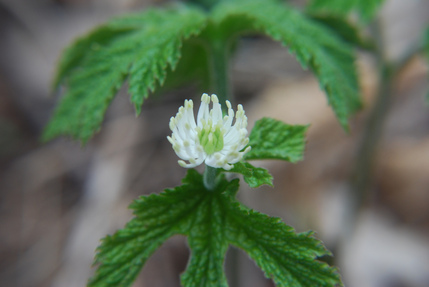 Goldenseal, a native plant has a history of healing.
The History, Medicinal Uses and Cultivation of Goldenseal,            Hydrastis canadensis L.
by Maureen McCracken

Goldenseal, is a native North American woodland plant, and it is believed to be the only living species of the genus Hydrastis.  The herb has a long and colorful folk history.  Over the years, goldenseal has been referred to by a large number of interesting names including: Indian dye, yellow root, ground raspberry, yellow puccoon, wild circuma, eye root, eye-balm, yellow paint, wild turmeric and yelloweye.  Many of these names are derived from the plants’ numerous uses.

Goldenseal has been harvested for its medicinal qualities for centuries.  These medicinal properties stem from Goldenseal’s chemical components: three active alkaloids, namely Hydrastine, Berberine and Canadine, as well as traces of essential oil, fatty oil and resin.    Cherokee Indians used Goldenseal root as a treatment for cancer, as an antiseptic, to treat snakebite and as a health tonic.  Iroquois Indians used it to treat whooping cough, diarrhea, liver trouble, fever, pneumonia and several digestive disorders.  They also made a concoction mixing the ground roots with bear grease to use as an insect repellent.  Native people also boiled the roots to make a yellow dye.  Early Americans, who used goldenseal roots to make a solution to wash the eyes of infection, learned about the herb from the Native peoples.  Goldenseal was also used to treat sore throats, mouth sores and digestive problems.

Goldenseal is now widely available in health stores across North America in various forms: capsules, tablets, oil, tincture, compound, dried root, dried leaf and powder.  Its current uses stem from the herb’s Indian and early settler heritage and include: treatment for nasal congestion, mouth sores, eye and ear infections, and as an antiseptic, antibiotic and antifungal.  As with many medicinal plants, its use is supported by tradition, as there is little supporting scientific evidence.

History of a healing herb
Commercial interest in Goldenseal root as a medicinal herb began in the early to mid 1800s.  Until recently, most of the supply was harvested from the wild.  Due to its popularity as a healing herb, Goldenseal has become seriously threatened by over-harvesting.  In addition, deforestation has further threatened the plant, as its natural habitat continues to be cleared.  Consequently, in 1991, Goldenseal was placed on the endangered species list.  The Department of Agriculture has taken action to promote Goldenseal stewardship and conservation.  Many states are encouraging production of Goldenseal as a farm crop; however, it is a slow process as crop development can take up to five years before harvest.

Goldenseal is a perennial herb, hardy in zones 4-8.  The much sought after roots are horizontal rhizomes covered with bright yellow fibrous roots.  Mature plants are 6-14 inches tall, with large toothed leaves and a hairy flower stem.  Small, white, inconspicuous flowers bloom in the spring and produce a single fruit in July.  The fruit, which resembles red raspberries, is not edible.  This perennial spreads through its rhizome and root system.  Goldenseal grows best in shade in rich, loamy soil.  It likes moisture, but must have excellent drainage.  Mulch provides a good winter cover and helps maintain the moisture.  Plantings under oak, poplar, walnut and basswood have been successful.  Propagation is usually done by dividing rhizomes every 3-5 years, as seed propagation yields less predictable results and takes approximately two years longer.  However, seed production is important for plant adaptability, especially in the wild.

As with anything used for medicinal purposes, large doses should be avoided.  Additionally, it should be noted that avoidance is advised during pregnancy as goldenseal stimulates contraction of the uterus.  It may also raise blood pressure and should not be used by people with any kind of cardiac problems.  MM April 2010