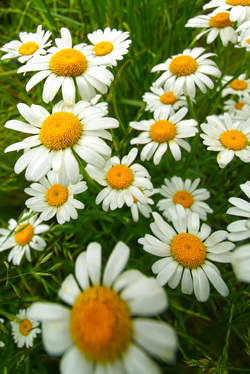 One of the sunflower families' most useful plants.
The History, Medicinal Uses and Cultivation of German Chamomile, Matricaria recutita or M. chamomilla

German Chamomile, Matricaria recutita or M. chamomilla, is an herb that originated in Europe.  Having escaped to the wild and now naturalized on almost every continent, it can be found growing along fences, roadsides, in sunny open fields and in herb gardens.

German Chamomile is part of the Sunflower Family, Asteraceae.  The tiny daisy-like flowers are white with raised, cone-shaped, yellow centers.  Flowers are about an inch wide, growing on long, thin, light green stems, which are branched, round and hollow.  The entire plant has a fruity apple-pineapple scent and grows erect to a height of 20 to 36 inches tall.  Its leaves are bipinnate, light green and feathery, and flowers explode into bloom from May to October.  Once in bloom, the above-ground parts of the plant may be gathered and dried for later use.  It is from the plant’s fresh and dried flower heads that infusions, liquid extracts and essential oils are made.

Growing Chamomile
Propagation is from seeds, which can be sown in spring or fall.  Although drought tolerant once established, German Chamomile needs plenty of water to germinate and for development of young plants.  It will tolerate many soils, but prefers sandy, well-drained soil with a pH of 7.0-7.5 and lots of sun.  Flower heads are harvested in summer while in full bloom.  Flowers can be used fresh, frozen or dried.  However, volatile oils are lost rapidly upon drying.  The medicinal uses of German Chamomile go back thousands of years to the ancient Egyptians, Romans and Greeks.  Its medicinal virtues were deemed important enough that Hippocrates, Galen and Asclepius made written references to it.

Herbal Tea
German Chamomile is one of the most widely used flowers for herbal tea.  Chamomile tea is so popular, it is found in most grocery stores.  With its many medicinal properties, appropriate for both internal and external application, the flowering tops of the Chamomile plant are also used to make liquid extracts, capsules and tablets.

German Chamomile flowers are used in hair shampoo, which is especially beneficial for fair hair.  The flowers are sometimes added to cosmetics as an anti-allergenic agent or made into a salve for use on hemorrhoids and wounds.  Dried herbs are used for potpourri and aromatherapy.  There are Chamomile salves to treat skin inflammations, sunburn and burns.  Add Chamomile to the bath for relaxing tired, achy muscles and feet, and to soften the skin.

Safe but Use Caution Always
Except for the small risk of allergy, German Chamomile is also one of the safest herbs to use.  However, as with any medicinal uses of herbs, caution is necessary when combined with other drugs.  Because German Chamomile is broken down by certain liver enzymes, it may interact with other drugs that are broken down by the same enzymes.  Those drugs may include: Fexofenadine (Seldane), statins (drugs that can lower cholesterol), birth control pills and some antifungal drugs.  MM March 2010