Perilla, P. frutescens: an interesting and valuable addition to the garden 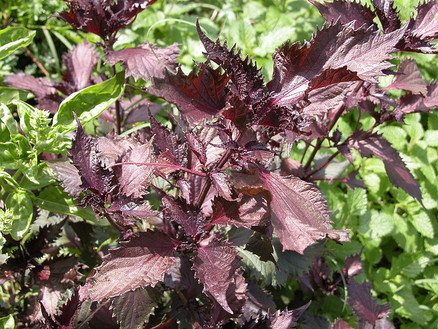 Perilla a colorful foliage plant is native to East Asia.
The History, Culinary, Medicinal Uses and Cultivation of Perilla
by Maureen McCracken

Perilla, P. frutescens, is an interesting and valuable addition to the garden, a member of the mint family, Lamiacae.   Characteristic of plants in this family, Perilla has square stems.  The Latin word frutescens means shrubby or bushy and refers to the plant’s growth habit.

Common names include shiso, beefsteak mint, purple mint, Japanese basil and wild coleus.  Perilla looks similar to coleus, but unlike coleus, perilla survives the brutal sun, heat and humidity of our zone 7b/8 summers.  Perilla performs well in shade, partial shade or sun, plus it is drought tolerant.  Leaves can be green, purple or variegated.  Flowers are small, white to light lavender, and grow from terminal spikes about 4-6 inches long during a blooming period of August/September to late fall.  In the Piedmont, this easy-to-grow annual happily reseeds itself, so you will never have a shortage!

Although perilla reseeds freely, young plants are easy to remove and control, due to the plant’s shallow root system.  It can also be easily controlled by removing flower spikes before maturation.  However, if left unattended, perilla can become invasive.

Toxic to cattle and horses
Perilla is insect and deer resistant.  Interestingly, perilla is toxic to cattle and horses.  The plant contains perilla ketone, which is known to produce pulmonary edema in some animals.  All plant parts are toxic to these animals, especially the flowering structures.  Dried plants in hay can be toxic, but the greatest risk is associated with consumption of fresh plant material, especially if flowers and fruit are present.  As a result, toxic cases are seen sporadically, usually in the late summer or fall after grazing, most often in cattle and horses.

Perilla Oil
Perilla is an herb native to East Asia, and is used for flavoring in many Asian and Indian cuisines.  The spicy flavor of the purple leaves—with its own unique anise-like flavor with hints of cinnamon and mint—makes a zesty and colorful addition to salad.  Perilla’s essential oil may also be used for medicinal purposes.  Perilla oil is obtained by pressing the seeds of perilla, which contain 35 to 45 percent oil.  In Asia, edible perilla oil is valued more for its medicinal benefit than its flavor.  As a health supplement, perilla oil is a very rich source of omega-3 fatty acid.  It is also used as a drying oil (similar to tung oil or linseed oil) for paints and varnishes.  Perilla oil can also be used for fuel.  The entire plant is very nutritious, packed with vitamins and minerals.  One of the isomers found in Perilla is 2,000 times as sweet as sugar and four to eight times as sweet as saccharin (Guenther 1949).

Medicinal Uses
There are many medicinal uses for perilla.  It has been used for centuries in Oriental medicine as an anti-asthmatic, expectorant, treatment for cough and lung afflictions, for influenza prevention and many other uses.  There are ongoing studies which suggest perilla may be useful in treating some types of cancer.

Decorative
And that's not all!  The crushed leaves rubbed onto the skin serve as an insect repellant, especially effective against ticks.  The versatile nature of perilla, plus its drought tolerance and colorful foliage make it a winner in container gardens.  Flower spikes can be dried and used in floral arrangements; these are particularly beautiful when sprayed gold and used in holiday bouquets.  If all this weren’t enough, Perilla attracts butterflies!  Perilla is a great addition to the garden.  Plant and enjoy it for years to come.  MM April 2010